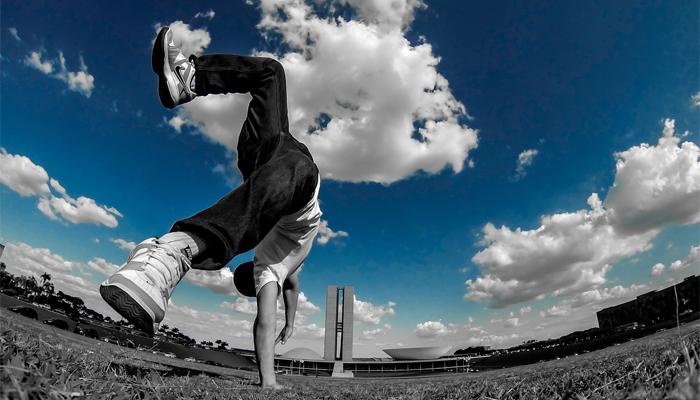 Parkour is a discipline for training that has become popular over the last couple decades through mainstream media. The traceur (traceuse if they’re female), or practitioner of parkour, is usually from the younger generation. They train in various urban areas, whether it be in the city itself or large empty buildings. In its origins however, it was something a bit different.

Before we get to in depth into where parkour came from, we’ll start with what exactly it is. In layman’s terms, the goal of parkour is to get from one point to another in a complex course as efficiently as possible. You need to do it quickly, and without any tools or devices. You have only yourself: your body, and your mind. Châu Belle once described it as a person having to overcome not just physical obstacles, but barriers in the mind and emotions as well.

I have heard parkour described as imagining yourself as being chased. In that way you must never waste any move, or energy. You need to be fast, and to do that you need to find the path that can flow from one move to the next. The end of one movement is the beginning of the next. You have the ultimate control over your body and mind to accomplish those tasks, but at the same time cannot stop to overthink it. If you ever stop to maneuver around a barrier, you’re taking too long and you might be caught. You negotiate your path by jumping, climbing, vaulting, rolling, dropping, swinging, running, or any other move that suits the situation.

You learn to think freely, and to see your environment from outside the box. Do you go across, over, under, or through? It is seen as freedom, or even a spirituality, as much as it is a form of training.

What is it NOT?

The words parkour and freerunning are generally used interchangeably. Competitions around the world will combine the two together when at a competition level. But it really depends on who you’re asking. There are some that are very particular when it comes to defining parkour, and they will tell you that it varies to some degree from freefrunning. Enough that it is definitely two different things.

By a purely dictionary definition, freerunning is actually a form of parkour that is considerably more acrobatic and asthetic. If you were sto ask a parkour traceur, they might tell you that freerunners use “trickery”. Basically, if you’re doing fancy backflips while doing your parkour then chances are it is freerunning.

Not a huge difference, but enough of one that some practitioners get annoyed by the confusion.  The man who started freerunning was actually one of the original practitioners of parkour, so it is up for debate. He himself is high on the values of the art, and big on training. So it may just depend on your school of thought behind your training.

Something else that a lot of parkour practitioners are particular about is that it is not a sport. This dates back to its origins, but it is seen as a non-competitive discipline for training. It can be very difficult to get parkour athletes to complete at any level due to this. Some do, and they are very successful at it. But any time there’s a competition, there tends to be backlash from the parkour community over the difference in views.

Erwan LeCorre had once said that in competition it is implied that you’re expected to please the crowd. So the mindset you have going into it with parkour training doesn’t really work as a competitive sport, as it tends towards a more individualistic style of self-exploration. It was actually one of the complaints that the originators of parkour had when they were first discovered. When they first began showing their skills, they found they could not show in their demonstrations all their hard work or values behind what they had been doing. Many believe that parkour is just very ill-suited to be a competitive sport, and far better to remain a philosophically based training exercise.

There are many other objections to it. Many don’t see how you can make a training exercise a competitive sport. It implies you’re trying make your own performance an enjoyable show (see difference between freerunning and parkour above to see why some object to this idea). Others see the social aspect that you get from group training sessions a much more appealing prize to be won than any prize you could win. Then there is the issue of making the discipline unnecessarily dangerous during the events.

For those that do participate in the competitive events, they take a vastly different view of things. They see it as a way to bring recognition to the sport in their area. They see a way to bring the sport to others. Yes, there is the money for some, but for many it’s resources that are used for training and equipment such as parkour shoes and parkour gloves.

Though there have been athletics who have displayed skills similar to parkour in years past, the discipline for training as we know it was started by a French man by the name of Raymond Belle. He was born in 1939, and had been the son of a French doctor and Vietnemese mother. When his father died during the First Indochina War, he ended up in a military orphanage. Tough times for him, so by the age of 7 he started looking for ways to not be a victim. He would train himself, first by running and climbing trees. Then later he began using the military obstacle courses. He would eventually create his own courses that in order to test his flexibility, endurance, and strength.

It wouldn’t be until the next generation that it would develop into what we recognize today. David Belle, his son, learned of his father’s training methods. It was something that helped him survive as a young man, and helped him protect those he loved. David took up his father’s parkour training, and did it extensively. He would eventually do it to the exclusion of all else. He later taught his friends and cousins as well. They formed a group that would be called Yamakasi during the late 1908s. It was an exclusive training group with strict discipline.

The group would become popular in the late 1990s as they gained recognition, but that is where the problems started. The philosophy behind the discipline was originally that it was not just a set of actions, but a state of mind. So when the group has to perform in front of audiences, they felt that their extensive training and values just couldn’t be properly expressed in front of a greater audience. The group eventually disbanded and the members moved on to other ventures.

In 2001, Yamakasi the movie was released and it sparked a lot of interest to parkour. Till today, it is still considered the best parkour movie.

Though the originators of the discipline were disheartened by the negative influence of media that they attracted, they influenced generations of young people to follow in their footsteps. Each generation training hard, and trying to be the best self that they can be.