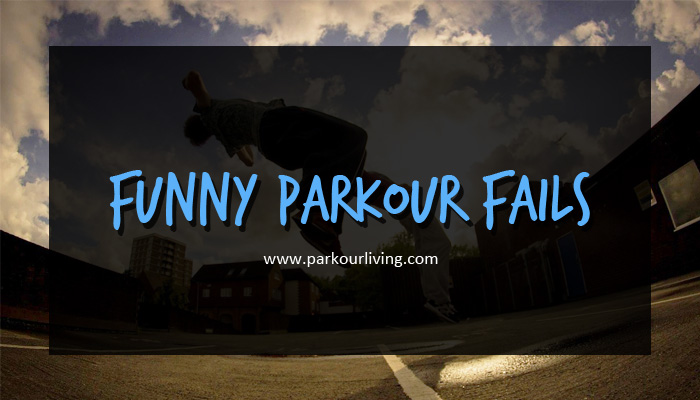 Inevitably, in parkour there will come a time when you fail. It happens to even the best of traceurs out there. When gravity is involved, it’s bound to happen. Unfortunately, there are times that there’s witnesses to these events and they’re willing to share it with everyone. Here are ten parkour fails videos that may make you chuckle at their failures.

Sometimes traceurs get safe practice in at the local gym. It’s a great place to go. It’s safer than the urban jungle, and your failed landings don’t leave bruises. Such as the case with this video. The practitioner takes a running start from the doorway and aims for two chest high stacks of floor mats. He vaults over the first one, and aims to leap frog over the next one. He just manages to touch it with his hands but overshoots his landing and hits the floor on the other side. Fortunately, the floor is padded and his shoulder didn’t suffer any damage. Unfortunately, the gym had been full of young gymnasts watching him in his attempt. At least it was entertaining for them!

Parkour Fails 2: How Far Can You Jump?

The envy of any traceur is the person who can do those incredible jumps or leaps. They are the rare few, but that doesn’t stop the rest from trying to match it. For those who are getting their practice in, sometimes they can’t help but try for that large gap and hope for a long shot. This man ran down a pier and made a long jump off the end of the dock. He had been aiming to land on a boat running alongside the pier. He miscalculated the distance and didn’t make it. The poor guy landed face first into the side of the boat, and slid slowly down the side in slow motion. Oops!

The worse thing you can do in some cases in not enough momentum to keep you going. If you’re not paying attention to the path ahead of you while you’re doing it, nothing good will come of it. A young  traceur did just this while running a path through a sidewalk laden with railings and stairs. He was slow, and made a good show of fancy flips. He did pretty well until he tried or a side flip over a railing that was going down a set of stairs. On the other side of that railing was a sheer drop to the sidewalk below as he found out. Luckily it was a short fall so he wasn’t hurt. He did however land on his behind, much to the amusement of his friends.

Parkour Fails 4: Right Through the Roof

It’s always a good reminder that you should always practice safety when doing your parkour runs, and being aware of your surroundings is one of those basic tenets. A practitioner in Egypt had tried a run across some roofs, but found to his dismay that the making a drop onto the delicate center of them was a bad move. He fell right through. I’m sure the occupants were as surprised as he was!

Here we have a man practicing a monkey gainer over a beach retaining wall. He actually made the vault over the wall just fine. He got his hands place, pulled his legs up, and made it over without his feet touching. The problem came when he got over the other side. He wasn’t quite sure how to stick the landing. So in a move similar to one doing a cannonball into a pool, he pulls up his legs into his chest and drops into the sand. I’m not quite sure he thought that one out.

Parkour Fails 6: How You Getting Down?

Three steps ahead, and always have an exit plan. These poor German boys had a good run across the roof of some buildings. The problem came when they got to the edge, they found themselves without the confidence, or exit plan, to continue the path. They really didn’t know how they were going to get down off the roof, so they just stopped and tried to come up with a new plan. They were up there for ages trying to figure out how to get back down. To be honest, it was a bit like watching cats stuck up in a tree. It then became an adventure rather than a freeing parkour run. By the time they got back down their nerves were pretty well shot. I’m fairly certain they’ll be more careful in the future.

This poor guy. He had tried so hard to show off his skills for his kids at a park’s jungle gym. He did pretty well making leaps between wide set bars. It wasn’t until the third run through that he slipped on the last bar and face planted in the sane. He got right back up with a laugh though, so at least he had good humor over the entire fail.

This traceur had some serious acrobatic moves. He walked across pipes like a tightrope, and ran across roofs, and leaped wide gaps with no troubles. The only thing he didn’t account for was the rusty pipes after made a drop off one of the lower roofs. Definitely expect the unexpected in parkour!

You ever have that one move in parkour that you just can’t seem to master? This is the one for this poor fellow. He just keeps on trying though. I’ll give him credit for his tenacity. He’s the sort of thing that will make him great one day.

This is really more of a compilation, but it fits so well. Either in a gap fail, losing your footing, and just missing your landing entirely, it’s a common problem in parkour. It also makes for some of the funniest fails whether you’re a professional or an amateur.

So that’s my top 10 funny parkour fail videos. Hope you have enjoy watching it. Do you have other funny videos? Do share it with us by sharing the link via the comment section or you could also post it on our facebook page.