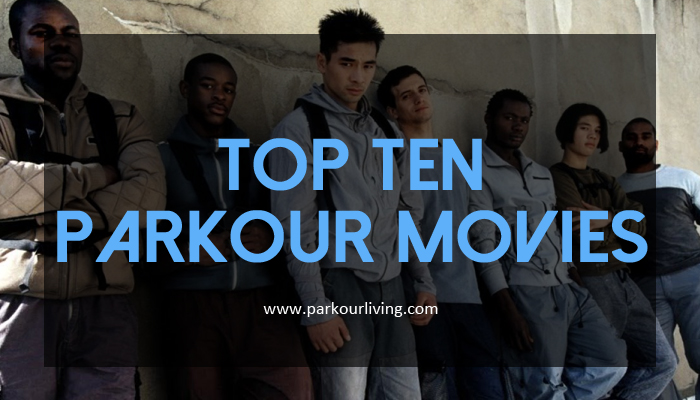 In the last 15 years, since the first team were able to put their skills to film, the sport has blown up in the entertainment industry. From the originators of the sport, to their proteges, and newcomers, there’s been plenty of films displaying this entertaining parkour style. Among the films out there, these represent the top ten favorite parkour movies.

This is the film that started it all. The men who took parkour and turned it into what it is today were found by Luc Besson and he wrote a scenario for them. This film was the result. Considering none of them were actors, it’s not a bad result. It’s really just a showcase for what they could do. This group had by this time already been performing for some years displaying their talents. This movie was a way to show them off to a much larger number of people. Bear in mind that freerunning had not yet come about, so don’t expect to see it in this film. It’s just bare bones parkour. The film has been described as traceurs who fancy themselves as rebels who defy both gravity and the law. They’re they envy of many. Unfortunately, one young fan takes his try and copying their moves and makes a critical mistake that lands him in the hospital. The film takes a more serious turn at this point. The mix of parkour and drama for the young, and inexperienced entertainers makes for a wonderful first film.

This is largely considered the golden standard in parkour films. It was done by David Belle, the first one to learn of parkour from his father Raymond who invented the sport. This film was done just a few years after Yamakasi, and was a great success for him. The later follow-up, District 13 Ultimatum was met with equal success. This is a french film done with is fellow parkour teammate from the early days, Cyril Raffaelli. It’s a futuristic Paris setting. David plays a former thug who works with an undercover cop, played by Cyril, to infiltrate a dangerous gang. There’s the threat of a bomb, some romantic entanglements, and lots of action scenes. It’s a much better put together movie than Yamakasi was, plot wise. Incidentally, it was also written by Luc Besson.

This was actually a remake of the french film District B13, and not done as well. It still featured David Belle in his role as the ex-thug, but they replaced fellow traceur Cyril Raffaelli with Paul Walker. While  Paul is a superb actor, he is definitely an amateur in parkour. That was the only down side of the film. Still, with David Belle helping to coordinate the parkour stunts, it was impressive as they could make it. The film this time is set in Detroit, but with the same basic plot of the leader of a gang trying to destroy the city. Something of note, this is actually Paul Walkers last fully completed film. It’s worth a watch. While I still think the original is better when it comes to the parkour and the structure, I do prefer Paul Walkers acting style in this one as far as that goes.

This is the first film of it’s kind for freerunning. Sebastian Foucan, another original member of the Yamakasi group, had later developed an alternative to parkour. It’s much more entertaining to watch especially in films. This film was largely responsible for bringing attention to the sport in America, if you hadn’t already seen the french films by this point. It just wasn’t something seen before. The film is another in the series of James Bond films, this time featuring Daniel Craig. Its a bit of a prequel of sorts to the other films, in that it’s supposed to be his first mission. As it happens in these sorts of films, nothing goes as planned. There’s a high stakes poker games, and terrorists,  and nobody to trust. Sebastian comes in as a freelancer who just happens to makes bombs. You can imagine there’s going to be an awesome chase scene involved in there.

Cyril Raffaelli moved on up in his career and played a character named Rand in this film. It’s part of the Die Hard series featuring the John McClane character made famous by Bruce Willis. This time there’s a cyber-terrorist that’s trying to crash Washington D.C. McClane gets in his way and gets a bit of help from a hacker to take him down. Cyril’s character, Rand, actually plays an assassin working for the bad guy in the film. He does have a team that he leads though, so that’s a bit of a step up there. He’s got a good amount of screen time. There’s some good action scenes, and a few good chase scenes as well. All in all, it’s a pretty entertaining film.

This film had mixed reviews, depending on if you were a fan of the Sands of Time series or not. Those unfamiliar with it found the film confusing at best. Regardless of whether you loved or hated the dramatic quality of the film, you can’t ignore the best quality is the awesome stunts choreographed by the parkour legend David Belle. The film’s premise is an old world one, mixed with a bit of fantasy. You’ve got a fugitive and a princess who work together to stop the bad guy who wants to destroy the everything. He’s got a magical dagger that will help him do it. Where the film seems to fail is explaining it to an audience who isn’t familiar with the series already. So, it’s a mixed reaction on if you liked it or not, but in any case you’ll enjoy it for the parkour scenes no matter which way you fall.

Ryan Doyle has become a big name in the parkour world after becoming the first permanently sponsored athlete with Red Bull’s Art of Motion. This movie was one of his chances to shine as both a fight choreographer and an actor. A bomb is locked around a freerunner who is forced to run a gauntlet to save his life, as well as his girlfriend’s. It’s very similar to the Running Man in a lot of ways, but without the convicts. What’s different about this one is the film starts off with several traceurs competing against each other in a club. It gets a bit complicated when it turns from simple competition run by a crooked gambler, to a sadistic man looking to use the runners in a high stakes gambling game. The film itself has fairly low ratings, but for the parkour scenes alone it’s well worth the watch.

This was the relatively unpopular of the Bourne series films that didn’t feature Matt Damon (it was a success in the box office during the time period it was released, but compared to it’s successors didn’t do as well). The entire series is very well known for its entertaining action sequences and chases scenes. This film is the best of the bunch because of the stunt double Levi Meeuwenberg who did the parkour scenes. He’s been in a couple other films doing parkour stunts, but this is his biggest to date. It really brought the film to life. The film this time was a bit different than the previous ones. It takes place during the same time as one of the earlier films, The Bourne Ultimatum (2007), and those events triggered something. The media got involved where they shouldn’t have, and it ends up burning another agent. It was actually a pretty entertaining film on its own.

You can always expect a lot of entertainment with this series. This film doesn’t disappoint, though admittedly the ratings could have been better. The action sequences were entertaining. The parkour talent brought in for stunts was Travis Wong. He’s got an extensive background for his field. He has a Bachelor’s in Drama. He is a World Freerunning & Parkour Federation athlete. The man was inducted into the Inside Kung Fu Hall of Fame at only 14.  You can imagine, he brings a diverse set of talents for this film, and he’s amazing. You can actually see him on screen as of of the Cobra Ninjas.

Admittedly, the film was a vehicle for Taylor Lautner. It’s still an entertaining film. It’s about a young bike messenger who ends up wanted by the Chinese mafia. Somehow, that ends up with him getting into the world of parkour. It’s a bit of a reach plot wise (and Taylor’s expressions are as ever just the one) but it’s endlessly entertaining to watch for the parkour alone. There’s a bit of a mix when it comes to the stunt doubles and coordinators for this film. The actors trained as hard as they could to do the work themselves for the parkour scenes, but some just required professionals to do it for them. The female lead had a parkour stunt double for the harder scenes, which was Monia Moula (best known for her work on Inception). Kelly Southerland was another of the stunt performers in the parkour scenes. It’s definitely worth a watch.